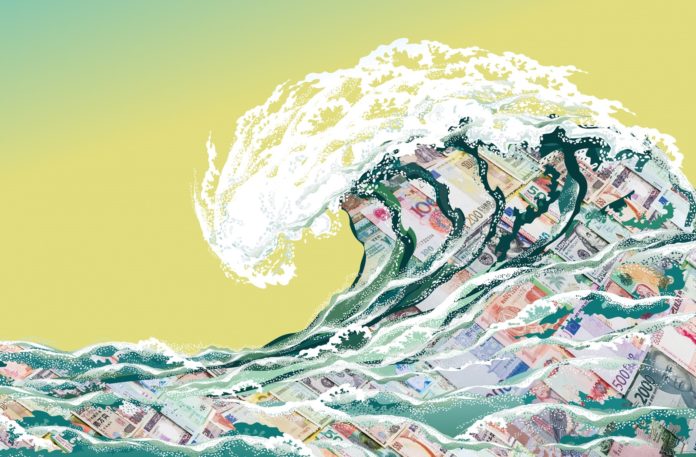 The COVID-19 pandemic is a blow to an already fragile global economic outlook. The health crisis, sharp downturn in activity, and turmoil in global financial markets caught emerging market and developing economies at a bad moment. The past decade has seen the largest, fastest, and most broad-based increase in debt in these economies in the past 50 years. Since 2010, their total debt rose by 60 percentage points of GDP to a historic peak of more than 170 percent of GDP in 2019 (see Chart 1). Although China accounted for the bulk of this increase—in part due to its sheer size—the debt buildup was broad-based: in about 80 percent of these economies, total debt was higher in 2018 than in 2010. Even excluding China, debt rose by 20 percentage points of GDP, to 108 percent, in 2019. As these economies respond to the pandemic, their debt will only increase.

The current global recession is unusual in its severity. Like previous crises, it is testing the resilience of heavily indebted countries and companies.

What policies do highly indebted emerging market and developing economies need to implement to mitigate the damage of the pandemic and support a durable recovery? History can give policymakers some useful pointers.

As documented in our recent study, Global Waves of Debt, before the current period, emerging market and developing economies experienced the following three waves of broad-based debt accumulation between 1970 and 2009:

1970–89: A combination of low real interest rates and a rapidly growing syndicated loan market through much of the 1970s encouraged governments in Latin America and low-income countries, especially in sub-Saharan Africa, to borrow heavily—culminating in a series of financial crises in the early 1980s. A prolonged period of debt relief and restructuring followed—through the Brady Plan, the Heavily Indebted Poor Countries Initiative, and the Multilateral Debt Relief Initiative (the latter two with IMF and World Bank support)—yet this was still a lost decade for growth and poverty reduction.

1990 – 2001: Financial and capital market liberalization enabled banks and businesses in east Asia and the Pacific and governments in Europe and central Asia to borrow heavily, particularly in foreign currencies—ending with a series of crises during 1997–2001 once investor sentiment soured. Resolution of private debt required large-scale bank and corporate bailouts, often with assistance from the World Bank and the IMF.

2002–09: A run-up in private sector borrowing in Europe and central Asia from EU-headquartered megabanks followed regulatory easing—when the global financial crisis disrupted bank financing during 2007–09—and tipped several of these economies into recession. Debt resolution was a pan-European effort and, again, required bank bailouts and international assistance.

The three historical waves of debt had several things in common. They all began during periods of low real interest rates and were often facilitated by financial innovations or changes in financial markets that promoted borrowing. The waves ended with widespread financial crises and coincided with global recessions (1982, 1991, 2009) or downturns (1998, 2001). These crises were typically triggered by shocks that resulted in sharp increases in investor risk aversion, risk premiums, or borrowing costs, followed by sudden stops of capital inflows and deep recessions. The financial crises were usually followed by reforms designed to lower vulnerabilities (including greater reserve accumulation) and strengthen policy frameworks. Many emerging economies introduced inflation targeting, greater exchange rate flexibility, fiscal rules, or more robust financial sector supervision following financial crises.

The first three waves also differed in important ways. The financial instruments used for borrowing evolved as new instruments and financial actors emerged. The first wave saw rapid debt accumulation by emerging economy sovereigns, whereas the subsequent two waves were mostly about borrowing by the private sector (although during the Asian crisis, many companies were quasi sovereign). The severity of the economic damage varied among financial crises and across regions. Output losses were particularly large and protracted in the wake of the first wave, when most of the debt was accumulated by governments. Meanwhile, in many economies, better policy frameworks after the first two debt waves helped mitigate the damage of the global financial crisis that marked the end of the third wave.

During the current debt wave—which began in 2010—debt has reached record highs, and private sector debt has risen particularly fast. Among commodity exporters, public sector debt increased substantially following the 2014–15 commodity price plunge. The current wave shows some interesting similarities and differences compared with previous waves. Echoing some of the historical cases, global interest rates have been very low since the global financial crisis, and—until the pandemic hit—the ensuing search for yield by investors contributed to narrowing spreads for emerging economies. Until recently, some major changes in financial markets again boosted borrowing, including through a rise in regional banks, growing appetite for local currency bonds, and increased demand for emerging market and developing economy debt from the expanding nonbank financial sector. As during the earlier waves, vulnerabilities have mounted in these economies with the advance of the current wave amid slowing economic growth.

There are also key differences. The average annual increase in debt since 2010 of almost 7 percentage points of GDP for this category of countries is significantly larger than during each of the previous three waves. In addition, whereas previous waves were largely regional, the fourth wave has been widespread, with total debt rising in almost 80 percent of these economies and by at least 20 percentage points of GDP in more than 45 percent. Following a steep decline during 2000–10, debt also rose in low-income countries, to 65 percent of GDP in 2019, up from 47 percent of GDP in 2010. Last, debt has risen in the nonbank financial system, which appears to be more lightly supervised and less resilient than the banking system, which was thoroughly restructured after the global financial crisis.

Emerging market and developing economies have endured periods of volatility during the current wave of debt accumulation, but widespread and severe financial stress emerged only after the COVID-19 pandemic hit. These economies’ ability to withstand financial stress is further complicated by other weaknesses, such as growing fiscal and current account deficits and a shift toward riskier debt. The share of government debt held by nonresident investors climbed to 43 percent in 2018, and foreign-currency-denominated corporate debt rose from 19 percent of GDP in 2010 to 26 percent of GDP in 2018. Among low-income countries, more than half of government debt is on nonconcessional terms. A mounting stock of debt and riskier debt composition have accompanied a decade of repeated growth disappointment (see Chart 2).

The pandemic has brought an abrupt end to financial market tranquility and is now testing the resilience of the economies, institutions, and policies of emerging economies. They are facing an unfolding global recession in a much more vulnerable position than when the 2009 crisis hit. Recent developments may tip some of them into the widespread debt distress that marked the end of previous waves. This is all the more likely given, first, the exceptional severity of the current recession, which is reaching into every corner of the global economy, and second, poorer prospects for a robust rebound amid possible repeat outbreaks and mounting backlash against globalization.

Right now, tackling the health crisis is paramount, whatever the fiscal cost. Fiscal deficits in these economies are expected to widen by about 5 percentage points of GDP, on average, in 2020 (IMF 2020). Investors are more likely to accept these precarious fiscal positions, including high debt and large deficits, if countries introduce mechanisms and institutions today that will restore fiscal sustainability once the recovery gets underway.

The experience of past waves of debt points to the critical role of policy choices in determining the outcomes of debt waves. While external shocks typically triggered financial crises, the impact on individual economies was heavily influenced by domestic policy frameworks and choices. Specific policy priorities ultimately depend on country circumstances, but—based on our analysis—there are four broad strands of policy that can help emerging economies weather the current global recession despite high debt:

Sound debt management and transparency: Countries are in dire need of financing, and sound debt management and debt transparency are critical to ensure that today’s debt can be repaid tomorrow and that borrowing costs are kept in check, debt sustainability is eventually restored, and fiscal risks are contained. If central banks contribute to fiscal financing, frameworks ensuring a return to pre-pandemic monetary policy can encourage investor confidence. Creditors, including international financial institutions, can spearhead efforts in this area by promoting common standards.

Good governance: Even with large-scale fiscal stimulus to support today’s plunging activity, money must still be spent wisely. In several previous crisis cases, it became apparent after the fact that borrowed funds went toward purposes that did not raise export proceeds, productivity, or potential output. Especially in light of the dramatic economic disruption in the current global economy, sound bankruptcy frameworks are needed to help prevent debt overhangs from weighing on investment for prolonged periods.

Effective regulation and supervision: While temporary regulatory easing is appropriate in the current context, proactive financial sector regulation and supervision can help policymakers identify and act on emerging risks. As the recovery gets underway, deeper financial markets can help mobilize domestic saving, which may be a more stable source of financing than foreign borrowing.

Robust macroeconomic policies: Robust monetary, exchange rate, and fiscal policy frameworks can safeguard emerging market and developing economies’ resilience in a highly fragile global economic environment. Current market pressure limits foreign currency exposure, but flexible exchange rates can soften some of the blow on the domestic economy in the short term; longer term, flexible rates can discourage the buildup of substantial balance sheet mismatches and ward off large exchange rate misalignments. Amid today’s financing pressures, revenue and expenditure policies must be adjusted to expand fiscal resources for priority spending on health and support for vulnerable groups. Invoking escape clauses to fiscal rules during the crisis may be necessary, but it is these rules that will help restore fiscal sustainability when recovery gets underway. Once the recovery gets going, though, fiscal rules and frameworks that ensure the eventual unwinding of the stimulus and return to fiscal sustainability are essential.

Only time will tell whether the current debt wave will end as its predecessors did, with a string of financial crises. The nature and magnitude of the shock imposed by the pandemic will stretch even the most resilient economies. Global cooperation and support are more critical than ever. But we must remember the number one lesson of previous debt waves: domestic policies are essential when it comes to fending off financial crises.

>>>AYHAN KOSE is director of the World Bank’s Prospects Group, where FRANZISKA OHNSORGE is manager and PETER NAGLE and NAOTAKA SUGAWARA are senior economists.