‘I see absolutely nothing wrong with Kan Dapaah’s video’ – Edem

Ghanaian rapper, Edem has defended the National Security Minister, Albert Kan Dapaah over his leaked video, adding, the two involved (Kan and his girlfriend) are matured enough to indulge in any form of consensual sexual escapades.

In the leaked video, the National Security Minister “threw caution to the wind” while speaking to his unidentified lover about how he would miss her and all.

Mr. Dapaah in the said video was also seen making romantic gestures which suggested he was being manipulated by love.

Scores of Ghanaian celebrities including Yvonne Nelson, Ama K. Abebrese, Kwame Aplus, and many others have since shared their varied opinions on the issue with a majority of them heavily criticizing and mocking the National Security boss for his “immorality and carelessness”.

But Edem, on the other hand, believes whatever the National Security boss chooses to do with his girlfriend should not be a headache to anyone.

“Okay So …I honestly see nothing wrong with Kan Dapaah’s video. Two Adults can indulge in anything once it doesn’t bother anybody. The convo to sounded one-sided too. You should be careful if you are asked what u wearing ooo,” he wrote on Twitter 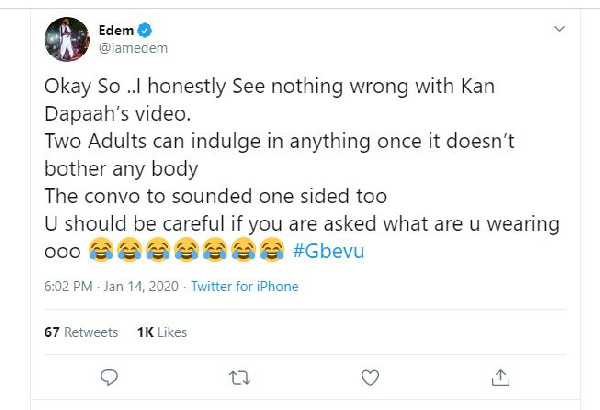 Paulina Oduro reveals why she parted ways with...