The Paramount Chief of Nkwanta Akyode, Nana Obombo Sewura Lupuwura II has commended President Nana Addo Dankwa Akufo-Addo for the rate at which the Oti Region is developing.

“All the people in the region and beyond will attest to the fact that within this very short period of our independence, we as a region have begun to witness remarkable and progressive development. His Excellency, we wish to appreciate your good leadership since your assumption of this high office of the Presidency. Under your leadership, we the people in this part of the country have enjoyed tremendously from your leadership,” Nana Obombo Sewura Lupuwura II said.

He made the remark on Sunday, 16th February 2020, when a durbar of Chiefs and people of Nkwanta was held in honour of the President Nana Akufo-Addo, as part of his 3-day tour of the Oti and Volta Regions.

Thanking President Akufo-Addo for the creation of the Oti Region, Nana Obombo Sewura Lupuwura II stated that “by this singular action, the President has clearly demonstrated his commitment to his word for which we the people of the region will forever remain grateful.the creation of the region, the Nkwanta Chief stated that “construction of warehouses to support agricultural activities, the rehabilitation of the magistrate court, the construction of a three-classroom block at Nyambon, the rehabilitation of markets in Nkwanta, and many more under the 1 million dollars per constituency fund” are being undertaken.

Additionally, he thanked the President for the construction of emergency school blocks and a girls’ dormitory at Nkwanta Senior High as a means of addressing the increased school enrolment by reason of “your best policy of Free Senior High School”. 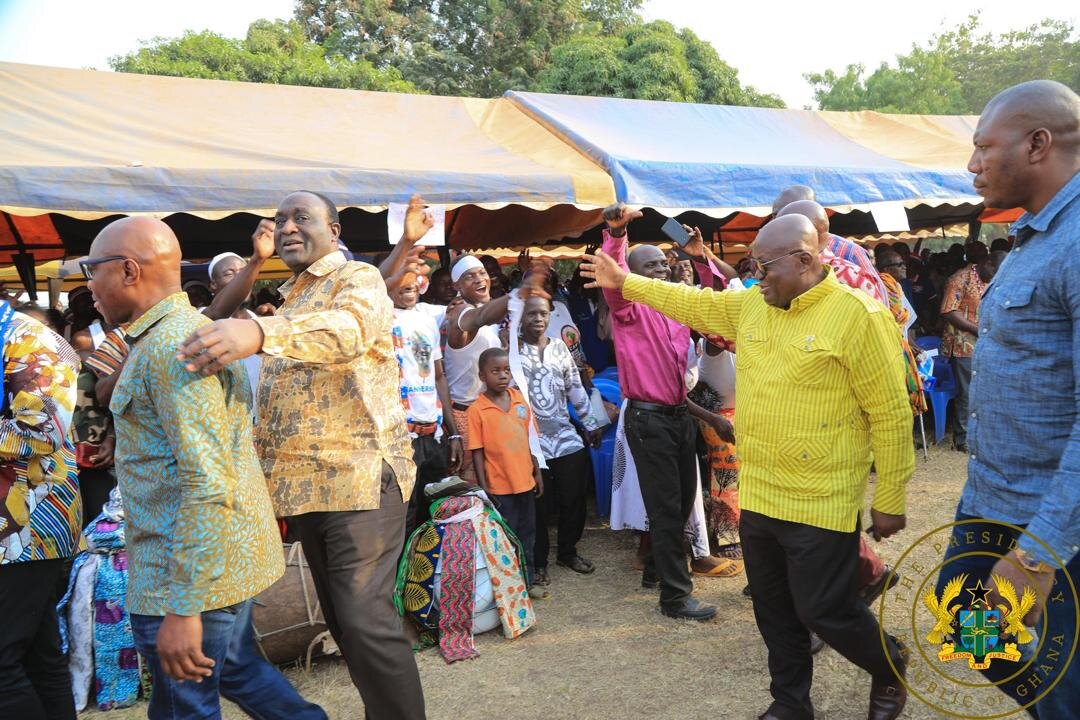 He also acknowledged the efforts President Akufo-Addo is making in the construction of two important roads, i.e. Nkwanta-Dambai road, Nkwanta-Shiare road, which are at various levels of completion.

“I am delighted to inform you that we in the Nkansah South constituency have also received with joy the ambulance which you commissioned on 28th January 2020 to improve health delivery systems,” he added.

He also thanked the President for the “foresight and vision to identify the problems we are facing in the country and here in Nkwanta particularly the fair share and distribution of regional offices, today you are here in Nkwanta to cut the sod for the construction of the regional agricultural directorate and two residential accommodation for the officers. This indeed is unprecedented in the history of the Oti enclave. Thank you, Mr. President, for your kind gesture.”

With Nkwanta South being an agricultural municipality, where, according to the Chief, volumes of yam, cassava, maize, millet, sorghum are cultivated annually, he stated that “currently under the Planting for Export and Rural Development initiatives, over 200 hectares of land under cashew cultivation, a program which is intended to diversify the agricultural system and provide ready raw materials for the 1 District, 1 Factory.”

Saluting “the wisdom of His Excellency, Nana Addo Dankwa Akufo-Addo, for the selection and approval of the regional agricultural directorate to be situated in Nkwanta”, he added that “this will indeed go a long way to support agricultural development in the region and also promote the objective of attaining food security in the country.”

With President Akufo-Addo’s policies such as the programme for Planting for Food and Jobs, 1-District-1-Warehouse, Planting for Export and Rural Development, yielding positive results, the Nkwanta Akyode Chief said that “it is the expectation of our farmers, especially the yam and cashew farmers, to increase their production from the current level of 50,000 metric tonnes to 150,000 metric tonnes for yam production and increase the production of cashew from the current level of 200 hectares to 300 hectares in the coming years.”

My experience as a Ghanaian student stuck in Wuhan [Article]

Trotros, taxis barred from travelling to locked down...