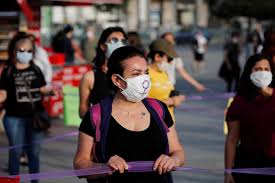 Coronavirus is threatening to undo recent gains made toward gender equality as millions of women and girls are predicted to have unwanted pregnancies and fall into poverty, world leaders said last week Thursday.

A “wake-up call” is needed to protect women’s and children’s rights amid the pandemic, said the president of Estonia and former prime minister of New Zealand who held a virtual summit with leaders from Canada, Costa Rica and Senegal and United Nations officials.

“We’ve all come together because none of us are prepared to stand by and see this pandemic erode the significant progress that has been made on the health and rights of women and children and adolescents,” said Helen Clark, who served as prime minister of New Zealand from 1999 to 2008.

“We are hearing stories from the front lines of the immunizations not being able to be done, the pregnancy services not there, the sexual health and reproductive health services generally not there,” she told the Thomson Reuters Foundation.

“It doesn’t have to be like this, but there’s not currently enough global solidarity.”

The United Nations estimates the pandemic could cause 7 million unwanted pregnancies over the next six months as women lose access to contraception and reproductive health care.

Child deaths are expected to spike by up to 6,000 per day due to reductions in routine services such as postnatal check-ups and vaccines, which could mark an increase in the under-5 death rate for the first time in decades, according to the U.N. Children’s Agency (UNICEF).

As vulnerable members of society, particularly in poorer countries, women are likely to take a big economic hit and have a hard time recovering, said Clark.

Several leaders said community-level interventions are the best solution, such as a campaign in Senegal to distribute food and information about health resources to women working in markets.

“If it is small, it is still important,” said Awa Marie Coll-Seck, minister of state to the president of Senegal.

“Traditional tools are not sufficient. Therefore let us try to do things differently, reach out more at grassroots level,” said Kaljulaid.

“If something positive can stem from this pandemic at all, it is the wider acceptance of the importance of global communal goods … and supporting the weakest in society, the children, adolescents and women,” she said.