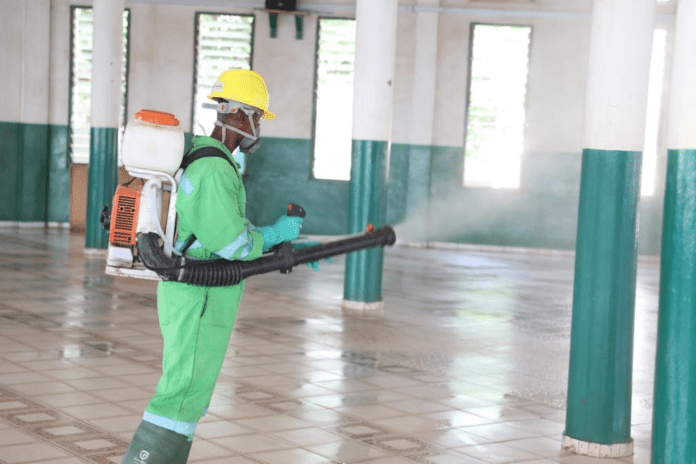 As part of efforts to contain the spread of the Covid-19, Zoomlion Ghana Limited on Thursday June 6, 2020 disinfected nine (9) mosques in Accra.

The rest are: Anlu Sunnah Mosque, Kardo Mosque – all in Nima and the Police Mosque, Cantonment.

The exercise followed an appeal by the National Chief Imam, Sheikh Osman Nuhu Sharubutu, for the disinfection of all Islamic facilities, including mosques across the country.

It was partly government sponsored through the Ministry of Zongo and Inner-City Development, and also formed part of Zoomlion Ghana’s Corporate Social Responsibility (CSR).

Interestingly, all the mosques that were disinfected had set-up Covid-19 Committees as directed by government.

That, according to the Imams is to show how ready and prepared they are to observe Friday prayers (Jum’ah).

At the Madina Central Mosque, the Madina Chief, Baba Amadu Seidu expressed the Moslem community’s appreciation to both the government and Zoomlion for the gesture.

He said adequate preparations have gone into Friday, (June 06) Jum’ah, following the government’s partial easing of the Covid-19 restrictions.

“We are a law-abiding people and so we will comply with all the directives and Covid-19 preventive protocols outlined by the President,” he assured.

He went on to stress that the Madina Central Mosque has also put in place the necessary measures to make sure that the 100 Muslems who will come to worship observe all the Covid-19 safety protocols.

According to him, the Moslem community in Madina and its environs have had several meetings with their chiefs and Imams all in an effort to ensure the safety of members during worship.

However, there were some reservations by the Alhamadiya Muslim Mission regarding the restriction on the 100 people who must congregate for worship.

According to the deputy Ameer II, Alhamadiya Muslim Mission, Alhaji Wahab Issah, limiting the number of Muslems who must congregate and worship was not helpful.

“We can’t pray with just 100 people, therefore, we have asked our members to stay at home,” he pointed out.

He also used the opportunity to commend Zoomlion and the government for the exercise, and called on all Muslems to support in the country’s quest to fight the coronavirus.

The solid legacy of the conflict between Rawlings and the NDC

Bawumia is not a benchmark for the NDC’s...

Coronavirus: The only bitter pill to reduce increasing...

I’m overwhelmed; it’s a victory for democracy but...