Government urged to consider prospects of growing apples in Ghana 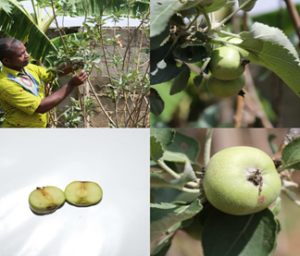 A team of scientists from the Crop Research Institute (CRI) at Fumesua has appealed to the Government to take a critical look at the prospects of growing apples in Ghana.

The scientists said it was becoming clear that some areas with temperate-like weather conditions could be of great importance to the growth of the fruit.

The humid areas in the country could also tolerate apple varieties common in India and other Asian regions.

The scientists made the call after visiting a site at Atimatim-Taaboum in the Afigya-Kwabre South District, where an apple tree had been planted and started bearing fruits.

The tree is said to have been planted by a Ghanaian resident in Belgium in his house in 2016, and it had now started bearing fruits.

The euphoria that greeted the discovery of a similar plant at Wiamoase in the Sekyere South District, which was later confirmed by research scientists as a fig tree, prompted caretakers of the house to inform the authorities of the presence of an apple tree in the Atimatim-Taaboum Community.

This compelled the team, led by Mr Beloved Mensah Dzomeku, Principal Plant Physiologist at CRI, to visit the site to take samples and conduct further investigations to ascertain the truth.

Mr Dzomeku confirmed to the Ghana News Agency that the plant at Atimatim-Taaboum was truly an apple.

“On site, the leaves and the fruits were subjected to the mobile app, PlantSnap, and results indicated that the plant was edible apple Malus domestica,” he said.

Mr Dzomeku said the fact that the plant was doing well in that area, with reports of the presence of apple trees in other areas such as Abetifi, Amedzofe and Teiman-Abokobi, was an indication that given a little bit of attention the fruit could be planted on a larger scale in the country.

He, however, indicated that humid areas could only tolerate the tropical apple varieties common in India and other Asian countries.

He said the CRI of the Council for Scientific and Industrial Research (CSIR) was capable of using tissue culture techniques to further evaluate and confirm the experiment as well as the propagation of the plant.

What was needed now was a policy initiative by the Government to support research to help develop appropriate varieties that would help large scale production of the fruit in Ghana.

The journey of Asamoah Gyan, Ghana’s football legend who inked his name in world history [ARTICLE]

How distraught NPP bigwigs are reacting to the...

I bath with my son – Akuapem Poloo...