‘There are more good people than bad’ 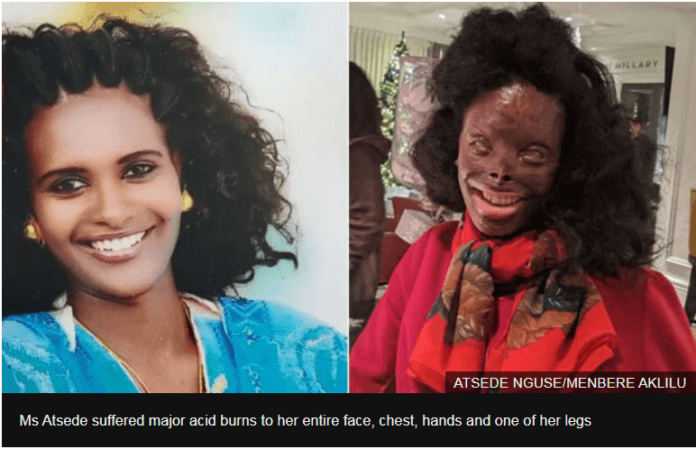 An Ethiopian woman disfigured after her estranged husband attacked her with acid in 2017 says that despite her suffering she has reasons to be thankful.

“There are more good people in the world than there are bad people,” Atsede Nguse told the BBC on the phone from her new home in the US.

“I have been touched by the kindness and love people showed me after the incident,” the 29-year-old mother of one said.

The acid poured over her destroyed her face and burned through her body.

She could not get treatment in an Ethiopian hospital and did not have money to go elsewhere.

When they learned what had happened, friends and well-wishers raised money to pay for treatment in Thailand.

But that money ran out before Ms Atsede was properly healed and she had to return home.

Then, for a second time, someone came to her assistance.

Menbere Aklilu, an Ethiopian women’s rights activist based in the US, read about what had happened to Ms Atsede on Facebook.

As a survivor of domestic violence herself, she said she wanted to help.

“When I read her story, I felt sorry like everyone else. But when I knew she was a mother, I thought: ‘What if my son was in her son’s place?’

“This really touched my heart.”

Acid Survivors Trust International, a UK-based non-governmental organisation, estimates that between 50 and 75 women are attacked with acid in Ethiopia every year.

This figure fits into a larger pattern of domestic violence.

A 2016 Ethiopian government study said that more than a third of adult women who were or had been in a relationship had been the victims of physical, sexual or emotional violence at the hands of their partner.

The attack on Ms Atsede can be seen in this context.

Her husband, whom she married in 2012, would beat her over minor disagreements.

“Our neighbours were worried, and said he may kill me some day. Despite it all, I continued to live with him for the sake of my child. I didn’t want him to grow up without a father, as I did.”

Finally, in 2015, after being beaten so severely that she had lost several teeth and her face had swollen up, she left Gambella, in the west of Ethiopia, and returned to her hometown.

“After I went to Adigrat, my mum and my sister, who lived in Saudi Arabia, helped me open a small cosmetics shop. I was doing well.”

But in June 2017, her husband got back in touch by phone, pretending to be abroad.

“He was acting as if he was calling from Saudi Arabia. But suddenly I heard the sound of kids speaking in our local language, Tigrinya.”

The following month, he came to her mother’s house in Adigrat.

“He was hiding [in the bushes outside]. I saw him come close to me. He then poured something on my head and all over my body,” Ms Atsede remembers, her voice cracking.

The acid started burning her immediately.

“I then cried out and shouted for help. My mother, brother and sister came running. But he escaped in a vehicle that was waiting for him.”

Ms Atsede suffered major burns to her hands, face, chest, ears, and one of her legs. She also lost her eyesight.

The local hospital could not help her.

But for her the most heartbreaking thing was her five-year-old son’s reaction.

“After the attack, my family brought my son to visit. When he got in to the room where I was, they told him to greet me, saying: ‘She’s your mum.’

After Ms Atsede returned from Thailand, she stayed at a centre for survivors of domestic violence in the capital, Addis Ababa.

Ms Menbere contacted her there and managed, after battling with the immigration process, to get her to the US.

She raised money from friends and family – and even strangers have helped out after hearing about Ms Atsede’s plight.

The activist says she treats Ms Atsede like her own daughter: “We live together. We share our pain and experience.

“I help women because I love myself. Because every time you help someone, your own wound heals. In addition, I believe I can motivate others to help.”

Ms Atsede is now being helped by medics in California and is determined to live a normal life.

“I have undergone successful surgery for my eyelids. I did not have eyelids. I can now open and close my eyes,” she says, hoping that one day she will get her sight back.

“I have also completed a Braille course and I am learning computers. I have big dreams, and I know I am going to make it.”

Her husband has never been found, but has been sentenced to life in prison in absentia.

“If I could see him, I would only ask him one question: ‘Why did you do this to me?’”

Tema residents protest use of Titi-Ofei’s facility as...

Did you just fall in love for the...